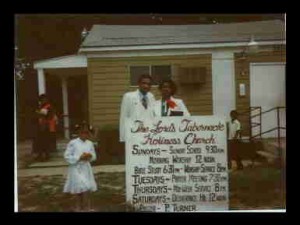 1972 was the year of the initial start of the Lord’s Tabernacle, when God saved Bishop and Mother Turner. Bishop Turner had been raised in the Baptist faith and had been very active member of Pleasant Hill M.B. church.  He had worked in the capacities of Sunday School teacher, Sunday School Superintendent, Choir Director, Choir President, Deacon, BTU Advisor and as an instructor and Co-advisor of the Youth Choir. Mother Turner had served on the usher board of Pentecostal Temple COGIC in previous years and had been assigned to serve the pulpit area.  Between the two of them God had given them training in the auxiliaries of the church.  They were in training and didn’t know it.

The ministry that they were saved under relocated to another city and they began looking for another ministry to join.  God spoke to Pastor Turner and said, “Go Home!” Mother Turner told him that if God told him to go home, then she was staying home with him.  Like Abraham unknowing what the future held, but willing to obey, he went home.  While being there he began teaching his family, Margaret, Lashelle (Pam), Llewellyn, (TC), Phil, Jr. (Junebug) and Yvette the Word of God.  .  Every Sunday, they would have Sunday School and worship together.  A short time later, God spoke to his brother, Tom Turner and his wife Rolina and said, “Join them.” Later, God revealed unto them that He wanted them to open their doors on Thursday nights to the people for prayer.

After a little chastisement from God, the doors were open for prayer.  The house began to fill up and the doors were soon opened on Sunday also.  God was beginning His Work!  The people were coming! Pastor and Mother Turner were waiting for God to tell them where to go with the people, for God had not spoken to them concerning opening a church, as of yet.  They along with the saints continued to pray.  One Sunday, in 1973 the lord revealed by his spirit saying, “IT IS GOOD FOR US TO BE HERE, LET US MAKE THIS A TABERNACLE.”  That is how the church got its name.  In October of 1974 the church was organized at 2822 Midland.  That marked the birth of this great church that you are now a part of, THE LORD’S TABERNACLE HOLINESS CHURCH!

In 1975, the Memphis and Shelby County Board of Adjustment was contacted for a variation in zoning because the 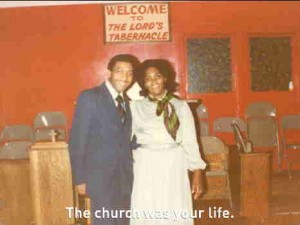 church had less than 10 feet of land on each side of it.  Property owners from Haynes to the golf course fought the variation of zoning. They contended that there were more than enough black churches in the community and that a church in the neighborhood would decrease property values. But, God said it was so and in December of 1975, approval of zoning was granted.

The membership of the church grew and grew.  The Lord added souls after his own heart and the living room became too small, so the walls of the boy’s bedroom had to be taken down to add room for the growing church. Mother Turner began seeking the Lord for more room and the Lord let her know that the house at 2818 would become available for sale.

The property became available and the church bought it in February of 1976. After the purchase of that property they set out to remodel it for the church. Renovations of the house was done by the Williams Brother Contracting Company and some of the inside work was done by the men of the church. The last service was held in the original living room church on Thanksgiving Day, 1976.

In 1977, God blessed Pastor and Mother Turner with an addition to their family a daughter, Edna (Bonnie); and in 1978 another daughter, Mi’chal. The church has continued to grow and many support groups and auxiliaries have been added.

The joy experienced was equivalent to the children of Israel coming out of Egypt.  We entered our new building that following Sunday.  An annex was added to the building in February, 1978, by Brother George Stout because of the growth.

By 1980, there was a need to build again. In October of 1980, Bishop Turner spoke with Charles and Raymond Abernathy of Oliver C. Warren Construction Company.  He was told the old debts had to be paid in order to build a new building. At that time, there were only a few paying members, but the people were stirred to build.  By January 1981, the old debt had been paid. The Abernathy’s were so impressed and believed in the work that they built the building with their own money. (WHAT A MIGHTY GOD WE SERVE!)  The foundation for the first non-house church was laid in March of 1981. Financing was later obtained through Tri-State Bank.

Only July 19, 1981, with a victory march around the neighborhood, we entered into the brand new red sanctuary of the LORD’S TABERNACLE HOLINESS CHURCH at 2822 Midland.  In 1983, the Lord rested upon the hearts of others and later on Bishop Turner to take on the title of Bishop. Then the reason for the title inspiration was revealed.

It was in 1986 that Elder Jimmie Clark Sr. approached him and said that the Lord had inspired him to leave the COGIC organization and join forces with The Lord’s Tabernacle.

In March of 1987, the foundation was laid for the expansion of the church. There was a

$230,000 expansion of the sanctuary, the addition of offices, classrooms, restrooms and a fellowship Hall by A1 Contractors owned by the late Elder Charles Carver.  In 1988, the Tabernacle Fellowship Ministries was formed.

We held our first service in the renovated green sanctuary on Sunday, July 9, 1989.  That was the day of the first Annual Tabernacle Fellowship Convention, of the Fellowship Ministries. We have several churches in the Fellowship and it continues to grow. We now meet in July during the week leading up to the second Sunday.

In 1998 Bishop Turner joined forces with Pastor Henry L. Hankins and the Full Gospel International Mission Outreach Ministries as the Memphis coordinator. Through this alliance Bishop and others have worked the mission fields of Africa. They also join us for the July Convention.

In October, 1999, the foundation for a $550,000 Educational facility built for the Lord’s Tabernacle Christian Academy and Bible Institute. A larger fellowship hall and bathrooms and annex were added by Evans contractors owned and operated by Brother Sidney Evans.

The church has continued to grow and many support groups and auxiliaries have been added.   Our first lady, Mother Margaret Turner went to her reward on Tuesday, Dec. 27, 2005. She was a prayer warrior and loved God and the members of this church. She is missed by all of us who knew and loved her.

In July of 2007, for the first time in the history of the church, we paid off our mortgage. On September 16, 2007 we had our mortgage burning service! We are saving to build a Family Life center and to enlarge our sanctuary.

In October of 2009, Bishop Turner married Evangelist Deborah Jones. She was the widow of Pastor L.D. Jones and has become part of the future of this ministry.

In December 2011 we started our process of rebuilding our training center mainly used by the Christian Academy and shared by all to meet the code specifications for a school. In September 2012, the facility addition opened with new daycare facilities along with the classrooms and offices.

On June 14, 2016, Our founder, Bishop Philemon Turner went to be with the Lord.  On July 22, 2016, Elder Melvin Kneeland was officially installed as the new pastor.